At the time, this was the largest show ever conducted.  It was a unique show because it involved the cooperation of otherwise highly competitive companies.  The Zambelli family, the Grucci family, the Santore family and the Sousa family all worked together to pull off a spectacle over New York Harbor and the Statue of Liberty on July 4, 1986, with a dazzling fireworks display destined to surpass any others held in this country, or the world.

The “Statue of Liberty Centennial Fireworks Spectacular” was an international display, with fireworks from many different countries including Japan, China, Germany, Italy, England, France, Spain, Canada, Australia, Taiwan and Brazil. Many were developed especially for this international program, never before seen anywhere in the world. Approximately 22,000 aerial fireworks were launched from over 30 barges and other vantage points, and an additional 18,000 “set pieces” – ground pictures, fountains, colorful low displays – were seen, stretching from the East River, around the tip of Manhattan, up into the Hudson River, and around the Statue of Liberty and Ellis Island.

The production required an estimated 220 miles of wires, 777,000 pounds of mortar tubes (through which aerial shells were launched) 30,000 pounds of equipment and staff of at least 100 pyrotechnicians on the sites to produce the displays.

This show is still arguably the world’s largest fireworks show ever conducted.  It far surpassed the size of the 1986 Statue of Liberty show.

Here are some quotes from John Sagaria, one of the Pyrotechnitions responsible for this huge display. 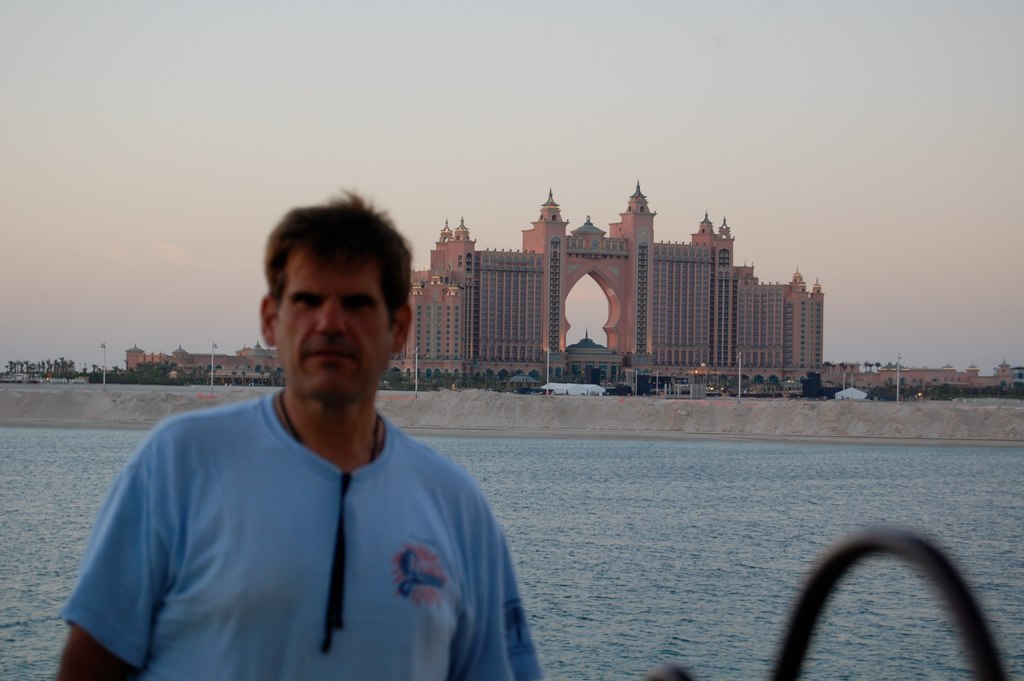 “Cut to the chase and get to Dubai. The Hotel in Dubai is of similar style and design as the one in the Bahamas, but is a lot larger. The effects Grucci did in Dubai on the hotel were more complicated and took many more modules and cues. It was the same style of effects as in the Bahamas but a much grander scale. My shoot location (thank goodness) was right near the hotel and I had a great view.

The show went off and what I remember from the video in the Bahamas, I saw live in Dubai. But for some reason it was not as impressive. It was not something that made you stand in awe. The hotel was nice, but if you ask anyone that was there that day, it was not the thing they will remember for ever.

The reason for this, is surrounding the hotel was arguably one of the greatest accomplishments in the world of pyrotechnics. Certainly the greatest that I have seen in my 15 years of doing this as a pro. It made the grand hotel effects (that up to that point was one of my favorite effects) look like a tiny small element. Sure the hotel was awesome, put the hotel on the Vegas strip and do that show by itself and people would be in tears and would never forget it. But in Dubai, it was just “oh that’s nice”.

In Dubai, the hotel was surrounded by the Worlds Largest Ever fireworks show. This is what it was billed as. People used the terms the largest ever in the history, and can be Seen From Space. In my old age I have come to always listen but not believe everything people say. People at times seem to sensationalize things and make things larger then they are. But what took place in Dubai was all true. The multimedia part was awesome, they turned the whole hotel in a huge screen and projected images on it.

When people talk large fireworks shows, many times they think large amounts of product just being shot in the air. The large ones that I dislike the most are the ones that are really just a bunch of small separate shows put together and duplicated. I have even made that comment about the Vegas NYE shows. They are spectacular because they are shot off the tops of billion dollar hotels, but they are really nothing more then a bunch of smaller identical shows shot at the same time.

Dubai was different. It was ONE large show. It was a show that took 7+ Containers of Fireworks (Yes I said containers, so in cases you are talking +/- 7000 Cases), over 225 Crewmembers and 12+ days on-site just to set up. It was only 9 minutes, and there was not a second that you would describe any of it as carpet bombing. And that is what made it the most impressive (to me) of all.

The hotel is located on an island that was man made and is in the shape of a Palm tree. The hotel is located where the coconuts would be on the palm. Phil Grucci designed the show to take full advantage of the site. The show was a big Palm. The aerial part spanned 11 miles around, the center was three miles long and it took over a thousand firing modules. The best part I think was how the fronds of the palm waved and changed colors. All of this which only could be appreciated from helicopter. This was not the duplicate of one firefile over and over but a complete single show, that spanned the control of 25+ computers and many thousands of lines of code.

The amount of fireworks, the number of people are all impressive, but none of that even becomes possible without a sponsor and a relationship. To me that was the most impressive part of all. The sponsor not only invested the large amounts of money to make this show happen, they gave the Grucci organization the complete trust. We had complete use of the Island, trucks, cars, generators, etc. This is what really made this possible. It was the relationship and trust the sponsor and the Grucci’s had for each other that impressed me, That is truly what makes any organization successful. Without that it would not even have been possible.

I have been on hundreds of shows over the years. Everyone of them has had issues. This show was no different, just here this issues we also of grand scale! There were many issues and this was one of the hardest shows that I have worked on. Some of the things I would have done differently, but just think of the logistics alone. Usually you and maybe 4-5 guys called your crew work on a show. On this show the crew was 225+, all of which had to be moved around, housed, fed and taken care of. Just the fact they (the Grucci Organization) were able to do this, and keep everyone safe was an accomplishment. Try to take 225 people out to lunch! How do you get them there? bus?, no maybe 5 buses!! Then try to do this for 12 days. Every time I thought it was bad I would think of the men and woman a short distance away in Iraq and Afghanistan, and how hard they have it, and it made any situation I was in seem trivial.

My favorite line I would use, is when I was working with someone, I would ask them if this was the largest show they ever worked on? It was a joke because it was the largest show anyone has ever worked on. And for that the company did a good job, we were all brought there, we survived and we made it home. The sponsor was happy and the memories are all that matters. I am very glad I went, the experience taught me a lot on many many levels.

Here is a small video: 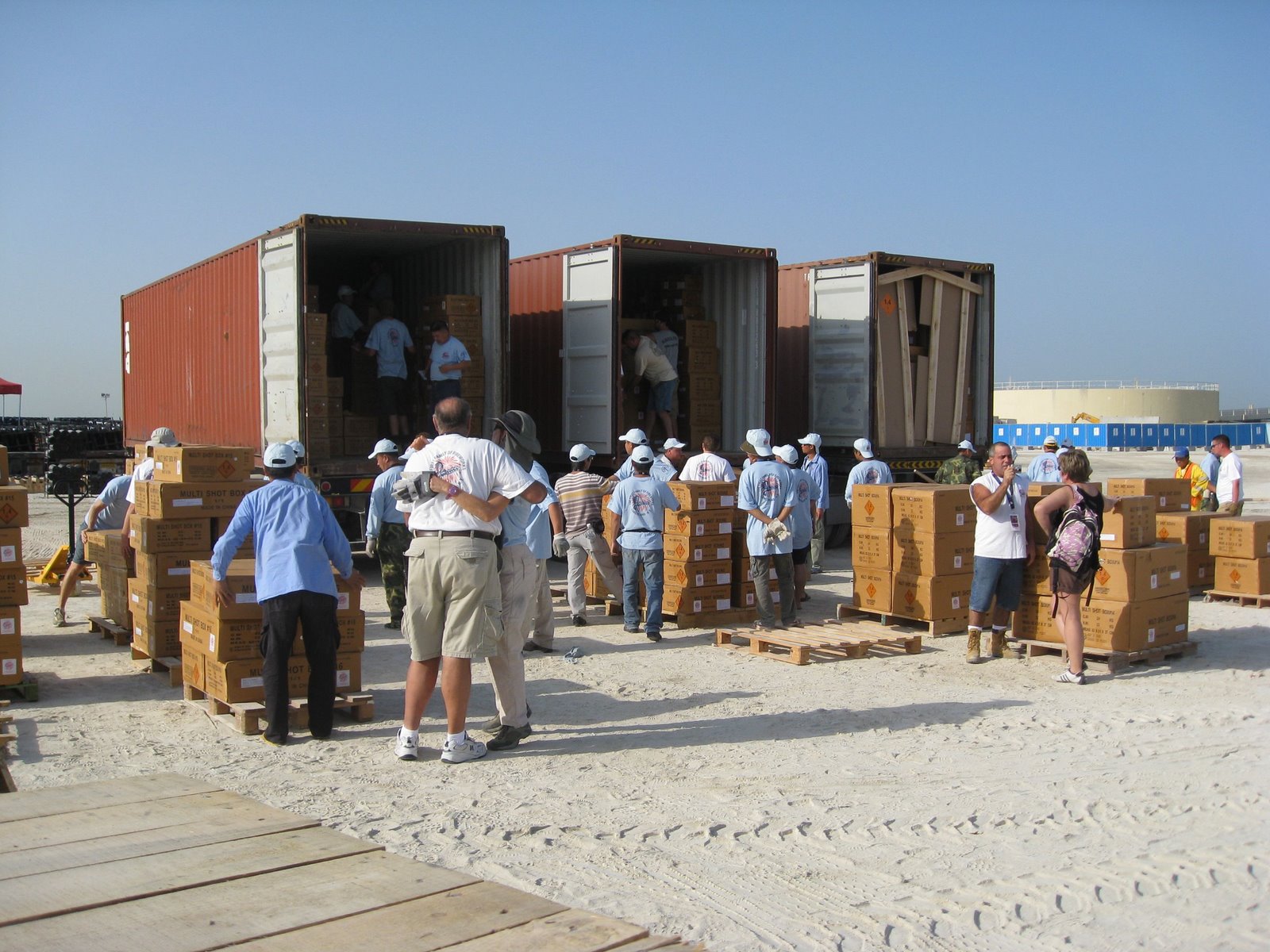 This entry was posted in Fireworks Display. Bookmark the permalink.